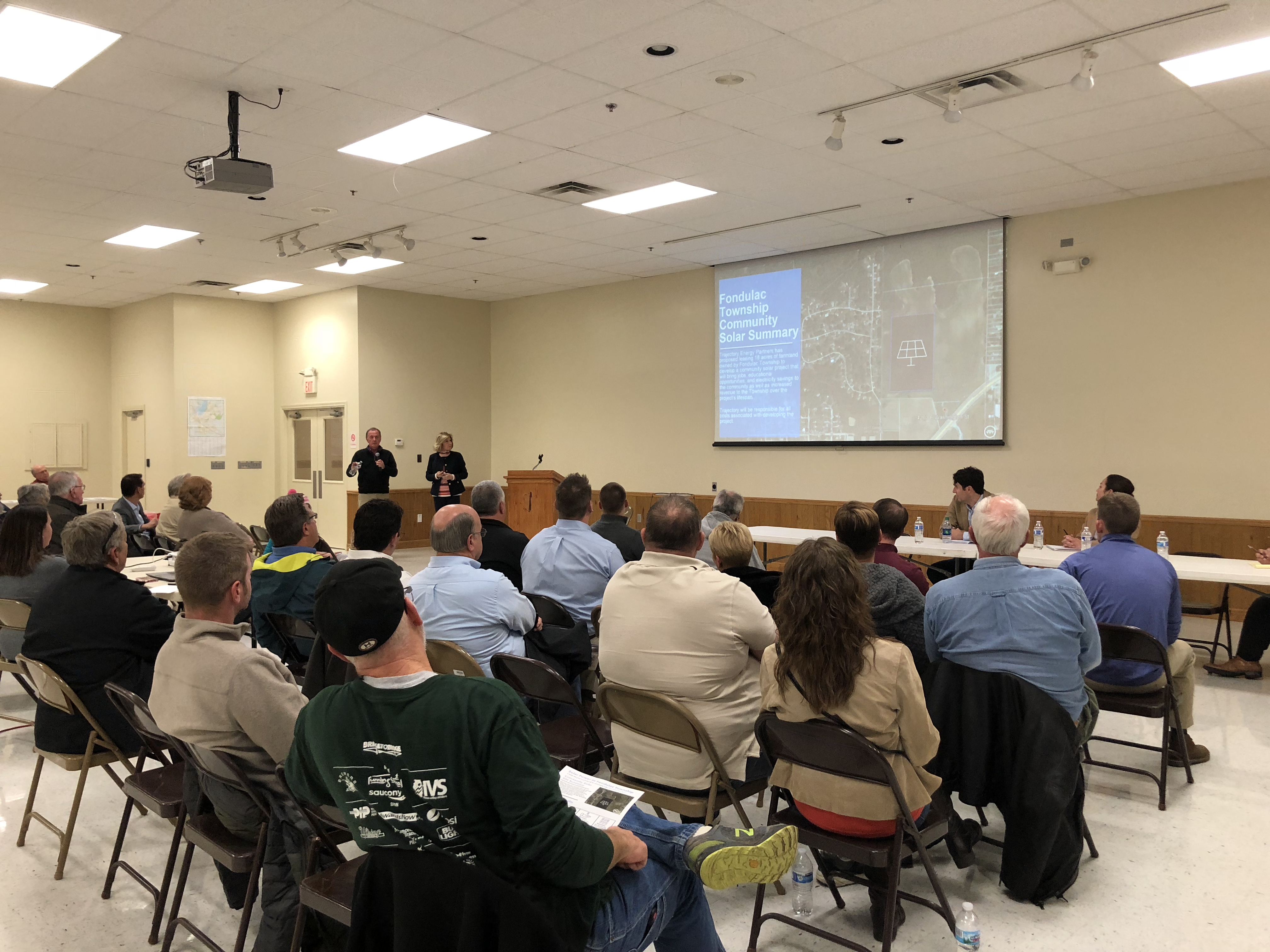 Source: PJStar.com
EAST PEORIA — A local version of the oldest existing form of government on American soil is looking to partner with a cutting-edge renewable energy firm based in Chicago.

Fondulac Township is proposing a combination solar panel farm and township cemetery expansion project on about 40 acres of farmland it owns between two residential neighborhoods in Sunnyland.

“This idea came to us out of the blue and now we couldn’t think of a better or more perfect fit,” Fondulac Township Supervisor Rick Swan said Tuesday. “There was a real ‘give back to the community aspect’ of the project. We’re very excited about it.”

About 15 years ago, the township bought farmland between Dundee Road and Cherry Lane to open a second Fondulac Cemetery at a future date. The current one on East Washington Street is 100 years old and is growing by about 100 burials a year. It is currently about 80 percent full.

At a chance meeting with Colleen Callahan at a Farm Bureau meeting this summer, Swan learned that Callahan, a former Illinois rural development director and an unsuccessful Democratic candidate for Congress in 2008, was working with Trajectory Energy on solar projects around the state. The conversation digressed and Callahan said Trajectory was looking for 20-acre parcels of land in central Illinois that were flat and open to sunlight.

“I thought, ‘We own a piece of land like that,'” Swan said. “We had the 60 acres, but the township didn’t need all of it for cemetery use.”

A meeting was called. Trajectory was almost immediately interested.

“This project is a great example of our vision of a clean energy solution,” said Jon Carson, a Trajectory partner. “We love the property in Tazewell County.”

The solar panel project would occupy 20 acres on the back side of the houses on Dundee Road; the cemetery would occupy 17 acres behind the houses on Cherry Lane. Trajectory would operate about 7,000 solar panels, 3-feet by 6-feet, laid side by side on the property, Carson said. The panels rotate, following the track of the sun throughout the day.

Trajectory will lease the property at a rate of $800 per acre a year with a 2 percent escalation clause for 25 years. That calculates to $461,000 of township revenue over the course of the lease.

State law passed last year paved the way for the type of solar facility Trajectory is proposing. It allows Ameren customers to subscribe to the solar service for a monthly fee. The customer would receive two bills each month, one from Trajectory for the amount of solar energy the customer used, and one from Ameren for the amount of traditionally-produced energy used. Carson said it would result in a savings of about 10 percent off the current Ameren bill. Trajectory hopes to start adding solar power to the Ameren grid by 2019.

Trajectory plans to construct a dozen of the solar panel farms in central Illinois. It is in discussion with owners of several potential sites in Peoria County, but none are as far along in the process as the proposal in Fondulac Township.

Because there are no other solar panel farms in East Peoria, the city is crafting a zoning ordinance to allow their operation after a special use review. That ordinance must eventually be approved by the City Council, according to planning director Ty Livingston. The City Council would also have the final vote on the Trajectory proposal.

A meeting with township, city and Trajectory officials to discuss the project will be held at 6 p.m. Nov. 9 in the Festival Building on East Washington Street in East Peoria. The township board will vote on the proposal Nov. 16.

Editor’s note: The day of the township board meeting has been corrected to reflect Nov. 16.