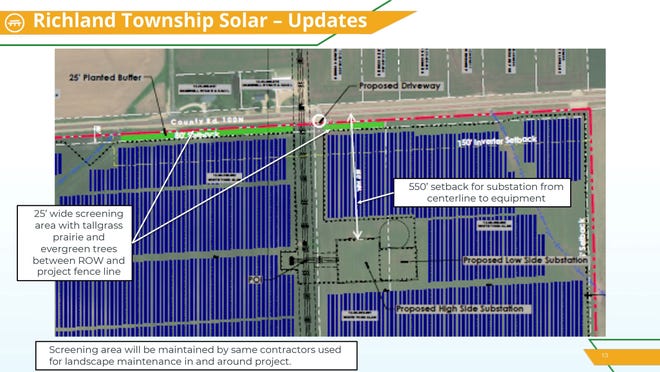 “A tract of farmland just outside Washburn, northeast of Peoria, is on track to become the site of a large solar energy installation with the capacity to power the equivalent of up to 10,000 homes.

A proposal awaiting final approval by the Marshall County Board would bring some 100,000 solar panels to a 223-acre site for construction of a 35-megawatt project expected to generate electricity for 35 years.“

Trajectory Energy Partners is working with St. Louis-based Azimuth Renewables on this utility-scale project, which would be “many times larger than the numerous 2-megawatt community solar farms that received permits in central Illinois in recent years, only a few of which have been constructed so far”. If approved, the project will be constructed in 2023, bringing temporary constructions jobs to the area and “a 35-year total of some $3.5 million in property tax revenues into local government coffers, with about two-thirds of that going to Lowpoint Washburn Community Unit School Board 21” 1JournalStar.

Owners of the project site land are brothers Todd and Troy White, who both live nearby and have been farming for many years.

“It is a very good farm. And sure, $5 corn is awesome, $13 beans are awesome. But it really doesn’t matter because then everything else goes up. Right now, anhydrous (fertilizer) is $1,400 a ton rather than $500[.] One way to look at it is that (with the solar lease) we know what we’re going to get and have every year – [w]e’re just looking out for the kids and grandkids.” Troy White noted at a recent ZBA (Zoning Board of Appeals) hearing, in response to objections that the solar project would be “taking prime farmland out of production”2JournalStar.