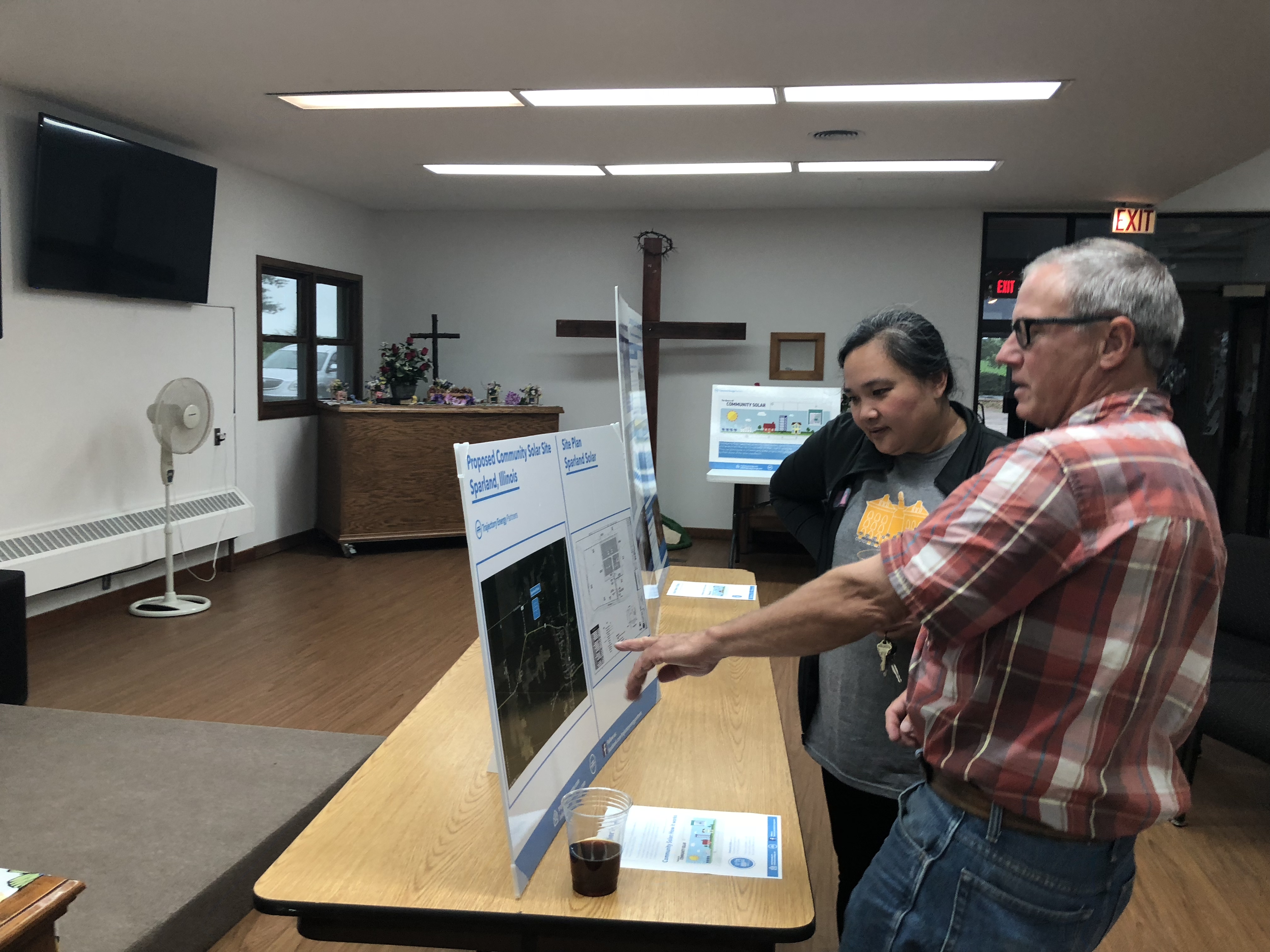 Source: PJStar.com
LACON — Marshall County has become something of a hotbed of the 2-megawatt “community solar” projects that are a staple of the state’s emerging solar industry, and three are scheduled for public hearings this week before the Zoning Board of Appeals.

Highland Park-based Trajectory Energy Partners LLC, which has been the dominant developer in the county, will be seeking special use permits in separate hearings Thursday for new projects in the Lacon and Sparland areas, as well as expansion of an already permitted project outside Henry.

In addition, recent legislative action will make it possible to provide the public at those hearings more specific information on developments shaping some key components of the industry, said Trajectory managing partner Jon Carson.

“There’s a lot going on,” Carson said in a recent interview. “It seems like as we go through this process, every time we’ve had hearings, there’s been more and more updates.”

The new projects would be at the northeast edge of Lacon and northwest of Sparland. The expansion would be just north of Henry, where reconfiguration of a permitted project would increase the capacity from 1.3 megawatts to the maximum of 2.

The hearings will begin at 7 p.m. at the Marshall County Courthouse.

The new developments have come in three laws unanimously approved recently by both houses of the General Assembly, one of which has already been signed by Gov. Bruce Rauner. The other two are widely expected to be, Carson said.

One, which will answer a frequent question at hearings, provides a uniform, megawatt-based assessment level for all commercial solar farms, much like a step taken earlier for wind farms. It sets an initial assessed value of $218,000 per megawatt, with taxes to be paid by the owner of the solar installation.

“Depending on the mill rate in a given jurisdiction, we think that a (2-megawatt) community solar project is going to average about $15,000 in property taxes per project,” Carson estimated. “We think this is going to be a big benefit to the communities we work in.”

A second law, aimed at long-term farmland protection, will require developers to file an agricultural impact mitigation agreement with the Illinois Department of Agriculture. That document must promise to compensate landowners for impacts to agricultural use and also to remove structures and return the land to use suitable for farming after the project’s life has ended.

And a third will set formal standards for designating a solar site as a “pollinator-friendly” habitat for bees and birds. The standards are being developed by the University of Illinois Department of Entomology.

“So somebody can’t just spread some dandelion seeds and call it pollinator-friendly,” Carson said.

The legislative developments are important because they benefit landowners and other members of the public, and they also enable developers to provide more complete information about the numerous projects proposed around the state, Carson suggested.

“We’re excited to see things come together with more certainty,” he said. “I think the concrete benefits are really starting to come together.”

If the new projects are approved by the ZBA and County Board, Trajectory will have six in the county in line to apply for the state tax credits that will be a necessary financial ingredient. The county has also permitted one project by another developer, and another is expected to be permitted soon by the city of Lacon, bringing the county’s total to eight.

Trajectory, which has concentrated much of its effort in Central Illinois, also has seven projects permitted or pending in Peoria County and two in Tazewell, and is about to apply for a permit in Stark.

“Rather than taking a scattershot approach, with one here and one there, we’ve really focused on getting to know the communities,” Carson said.

Besides waiting for state announcements on the application process for tax credits, Trajectory and other developers are finalizing plans for offering subscriptions to utility users. They’re generally estimated to provide a savings of 10 to 15 percent on the energy component of an electric bill.

“We expect to be able to start talking to people and preliminarily signing them up this fall. We don’t have all the details yet, but it will be a no-money-down subscription,” Carson said. “In most states where this has happened, there’s been a waiting list on these subscriptions. It usually is quite attractive.”