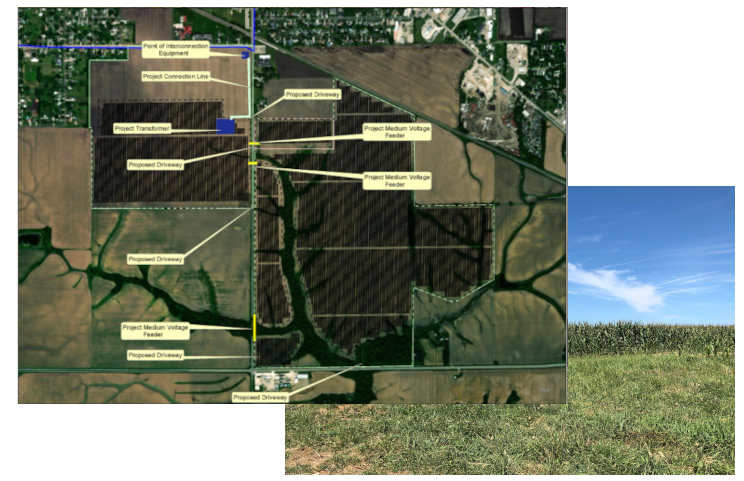 Image from City Of Galesburg

The Knox County Board on Wednesday night approved of several zoning-related items related to the Blackberry Solar Farm to the south of Galesburg.

The proposed 50-megawatt solar project is a $70M investment with an expected $5M in property taxes over 35 years.

Ken Springer with the Knox County Area Partnership for Economic Development spoke in favor of the utility-scale solar farm at the meeting.

“More than just a means to harvest energy, renewable projects like Blackberry Solar represent another revenue source for rural landowners. These projects allow landowners to generate stable, predictable, long-term revenue from land leases that is irrespective of weather patterns, drought, or floods. And with solar energy, these systems do very little damage to the land. At the end of its useful life, the solar systems can be removed and the land is returned to agricultural production.”

He also said the project intended to be good neighbors to the residential properties in the area.

“As designed, this project incorporates multiple features that will screen and preserve the viewshed from neighboring properties. The project will be abiding by the 500-foot setback from residences as written in the Knox County Solar Ordinance. And in addition to that setback, there will be three layers of viewshed protection: an agricultural buffer zone south of 5th Street, behind that a row of shrubs, and behind that a fence with privacy slats installed.”

Springer said that Blackberry had not pursued any tax incentives from the Knox County to build the solar farm.

Another supporter was Andrew Bowman, an Ontario Township farmer who had previously worked on a different renewable energy project, a wind farm.

Bowman said that, based on his experience working with the Orion Windfarm, the revenue awarded to landowners is far more lucrative than what they earn on farmland per acre. Additionally, it provides stable income without the uncertainty of commodity markets.

There was no one who spoke in opposition.

The board’s approval was unanimous.